As I previously said, the focus of version 2.0 is on new layout and modernising the app, so I have a good foundation to build on for the next couple of years. I also said there wouldn’t be any new features, but I just couldn’t help myself when I had the idea to add what I call Smart Views.

The first thing about the new layout is, the new, larger article view. The article list is still as configurable as always, but it now has a lot more space to shine. 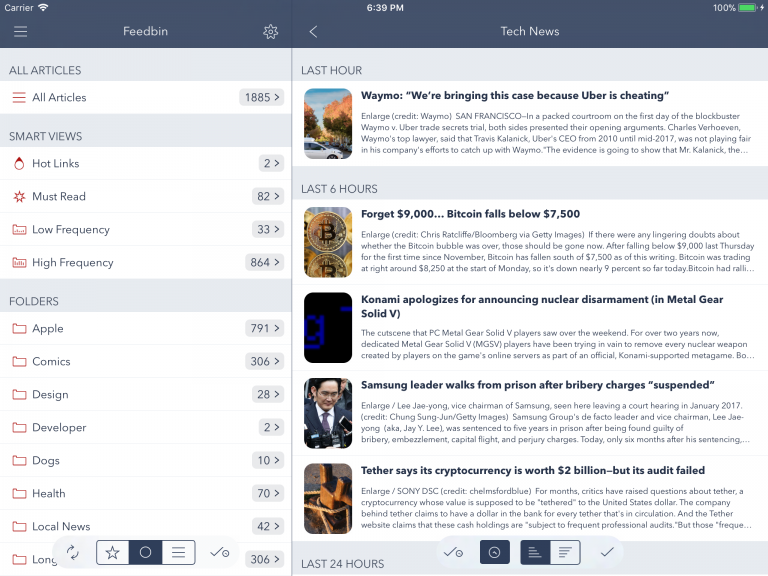 The article view also gets a lot more space. It’s now displayed modally above the article list and can be dismissed by simply swiping down. Or from the edge on either side. Or by tapping on the blurred content. What I’m saying is, it’s easily dismissed, making getting through a lot of articles easy. 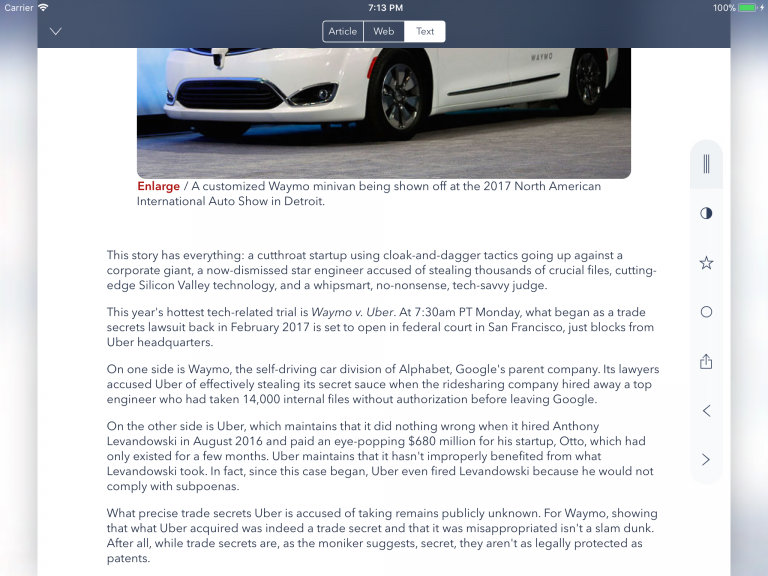 There are also a ton of smaller UI improvements across the app, for example you can drag the article view toolbar from the bottom to either side, or the parallax effect when scrolling in the article list. You should really just see it yourself.

Aside from the new layout, the app now supports everything you’d expect from a modern iOS app.

Full support for 3D Touch and Peek / Pop on devices with 3D Touch support. You can press to preview article lists, hot links, articles or preview images to jump directly to the image viewer (quite useful for comics). Yes, I know I’m late on that one.

On the iPad you can now drag articles right from article list to other apps. You can even choose whether the preview image or the HTML content is included.

Also new: Support for Hand off / Continuity. I’m surprised, that this has not been implemented by other apps yet. If you’re reading an article on your phone, your other devices, including iPads and Macs will no offer to open the corresponding website, so you can continue reading on another device if you want.

On newer iPhones, Fiery Feeds will also respond using the taptic engine to your taps and swipes. Apps without this just feel a bit flat in my opinion.

If the app quits in the background, the next time you launch it, Fiery Feeds will continue right where you left off. Yep, late on that one too.

And of course the new app is optimized for the iPhone X.

There are four Smart Views in Fiery Feeds, but the most notable is probably the Hot Links view.

Hot Links searches all your articles for links, and ranks them based on how many articles link to a given website and how old these articles are. It gives you a quick overview of the most important events. 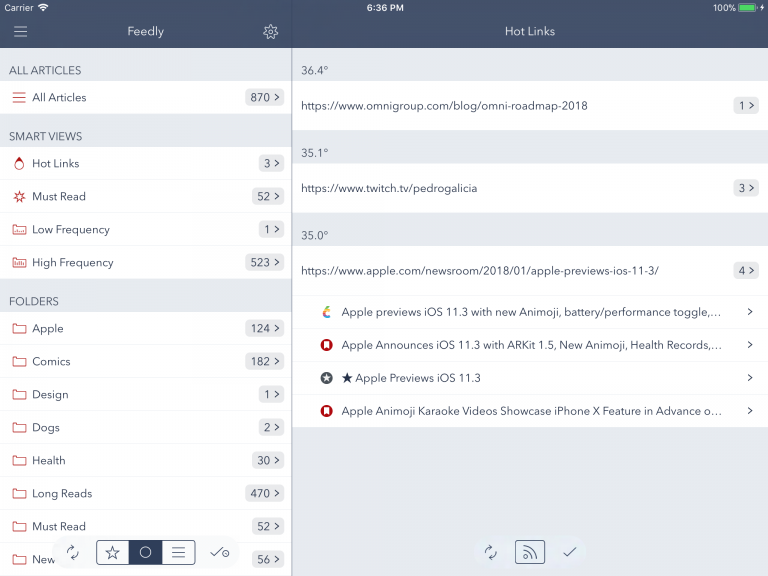 There are also two folders based on posting frequency.

The first is the Low Frequency Folder that shows only feeds that do not post often. It’s akin to the Infrequent Stories feature recently launched by Newsblur, only that everything happens on device and that it’s available for all services.

The second folder is the polar opposite, the high frequency folder. I usually use this folder to mark older articles read, if I’m behind of my feeds. Using this folder I can reduce the number of articles, without losing any of the articles from slower feeds.

The fourth folder is the least exciting. It’s a specially highlighted folder with your most important feeds. Simply create a folder and name it “Must Read”. It’ll be shown in the Smart Views section above all other folders.

I released a new, free version of Fiery Feeds about a year ago with an optional subscription, that unlocked a few additional features. That version eventually replaced the paid version. Fiery Feeds 2.0 will be an update to the subscription based app, at no additional cost (That’s why it’s a subscription).

I have also updated the paid version up to now, despite it not being for sale anymore. Version 2.0 marks the first update, that the paid version will not receive. As a sort of upgrade pricing, the premium subscription is currently 50% off, that is $4.99 per year. Anyone who subscribes until the end of February will stay at this rate until they unsubscribe.